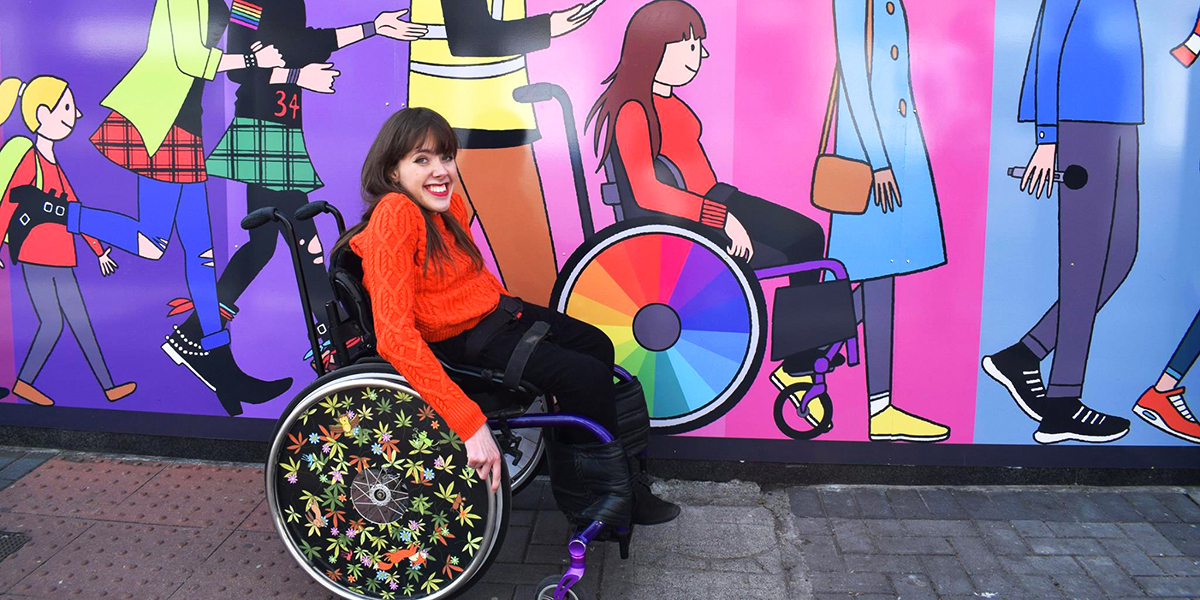 Based in Dublin, Ireland, Izzy Wheels is an enterprise with creativity and fun at its very core. The idea was inspired by the day-to-day life of Izzy Keane, a young woman who was born with Spina Bifida, and is paralysed from the waist down. The wheelchair that Izzy uses to provide her with mobility was, for a long time, as much of a hindrance as it was a help. When people saw Izzy, they saw her chair, and when they were looking at her chair instead of at her, they were missing out on her fun, firecracker wit and her loving personality.

From a young age, the innovative Izzy remedied the issue by decorating her wheels with stickers and drawings so that, when her wheelchair inevitably became an object of attention, it could at least serve as a reflection of her individuality. In 2015, Izzy’s fashionista sister, Ailbhe, undertook her last year as a student at the National College of Art in Dublin. She wanted her final project to take Izzy’s decoration habit to new heights. The result was more than just a school assignment.

Izzy Wheels reframes the way we see wheelchairs, expanding our first impression of a medical necessity into a new means of insight into the personality and style of its user. It began with Ailbhe’s personal designs – a series of bright, attractive wheel covers that are waterproof, sturdy, and can fit onto any manual wheelchair. The idea proved popular, and after a little time, things really exploded.

Over the past two years, Izzy Wheels has collaborated with a truly astounding number of award-winning artists and illustrators eager to get in on a movement that puts the person before their physical condition. These include Maser, Steve Simpson, Paula McGloin, Fuschia MacAree, Chris Judge, and Marylou Faure, to name just a few, and in October, the brand teamed up with prominent Irish fashion designer Orla Kiely to introduce the world’s first-ever designer wheelchair spoke covers.

"I was delighted to be approached to design wheel covers for Izzy Wheels," said Kiely. "Color and pattern can bring so much joy and to apply both to something so vital in people’s lives to me was an absolute honor. I love the result, and can’t wait to see them in action!"

All sets of covers cost $165, with delivery costing just $10 for those in Ireland and the United Kingdom, $12 for those in Europe, and $12 for customers all over the rest of the world.

It really is no small thing to say that the traction Izzy Wheels has gained has indeed been global. Earlier this year, they were the first Irish people to be asked to post on Instagram’s official account, reaching over 225 million followers with their message on the importance of individual expression for all. In just one year of trading, the brand has won seven national awards, including the coveted Accenture Leaders of Tomorrow Award 2017. Their video on Insider has been viewed over 14 million times, and they have been featured in articles by top publications such as TechCrunch and Adobe Create. The sheer personality packed by a duo like Izzy and Ailbhe has gained plenty of attention, too: earlier this year, they were invited to speak onstage at Inspirefest, a top convention for startups and entrepreneurs.

"Izzy Wheels empowers wheelchair users to make a statement about themselves," says Izzy, who also acts as the brand’s primary model. "It makes a person’s wheelchair into a friendly object rather than something purely functional. Having stylish wheels on your chair that match your outfit or show off your interests immediately addresses the chair and opens conversation." After all, a wheelchair is something that deserves attention – it’s a beneficial invention that grants independence to those who might otherwise feel trapped or isolated. A problem only arises when the chair receives more focus than the unique individual who uses it – and with companies like Izzy making their mark on the world, it’s a problem that will slip under the radar no longer.

Thinking of making an order with Izzy for yourself or a loved one? You’ll be glad to know that a portion of each payment is donated one of several Irish charities for those with physical disabilities. Happy browsing!