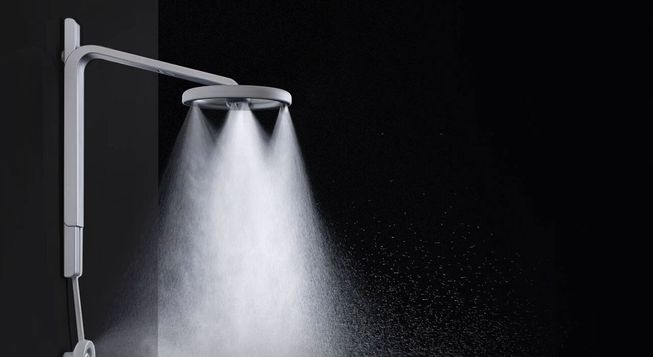 Until recently, the original design of the household shower had been virtually untouched. Now, innovators at Nebia have changed the game to give you a luxury shower experience, kinder to your skin, your wallet, and your planet, too.

It’s no big secret that the use of running water in the average household greatly surpasses what it could (or should) be. We let our leaky faucets go unchecked; turn on the washing machine for sake of a single t-shirt; indulge in a super-long shower after a hard day at work. And though we all want to help the planet – it’s the only one we’re going to get unless NASA shakes a leg with colonizing Mars anytime soon – sometimes that goal seems awfully far away, and a long session some hot water is just calling your name. Well, sit on that eco-ambivalent guilt no longer. This new shower from Nebia is here to give you the most relaxing soak ever, without wasting a single drop.

After almost five years of development and an overwhelmingly successful 2015 Kickstarter campaign, the team at Nebia have created a fully self-installed shower system that provides a true one-of-a-kind experience for the user.

Through the use of aerospace engineering, Nubia’s patented H2MICRO technology came to be. By atomizing water into millions upon millions of tiny droplets, the system covers more than 10 times more surface area on the body than the average shower, leaving skin hydrated and squeaky-clean. Breaking down the size of the water particles into a pressurized mist also means that a Nebia shower is incredibly environmentally-friendly, using 70 percent less water than other household shower systems. Numerically, that’s reducing 20 gallons of the earth’s most precious resource (plenty of which doesn’t even touch the body, vanishing right down the drain) to a mere six.

To boot, lower water usage rates means lower water bills, and for the average U.S. home, it takes less than two years for a Nebia shower to pay for itself. If the entire state of California were to make the energy-efficient switch to Nebia, the savings (203 billion gallons a year, equivalent to $3.9bn) would open up immense possibilities for a greener, cleaner community.

If the promise of a refreshing shower and a refreshingly-low utility bill isn’t enough to convince skeptics to make a change, they need look no further than the investment records of Apple chief executive Timothy D. Cook, who backed the project in 2015. Other big names to hop on into the shower of the future are Joe Gebbia, co-founder and chief product officer of Airbnb, who said, “Your shower will never be the same,” and Y-Combinator president Sam Altman, who insisted that the technology gave him the “Best shower of {his} life. Get excited!”

On a purely functional level, Nebia is one of the most user-friendly shower options on the market. Teaming up with an internationally-renowned industrial design firm, Box Clever, the design team created a shower as attractive as it is easy to operate. Its look is sleek, simple, and unobtrusive, with a 27-inch range on the arm to allow for users of all heights. The head, which rotates up to 45 degrees, is designed with every kind of hair in mind – yes, even that of the family pet. Sturdy construction means that a Nebia shower will never kick the bucket just when you need it most, and durable materials render wear-and-tear a non-issue.

First conceived in 2010 by Carlos Gomez Andonaegui (now the chairman and chief brand officer, the Nebia shower project began development in 2014 with the innovation of his co-creators, Philip Winter (Nebia’s CEO) and Gabriel Parisi-Amon (COO).

“We think we can have a very cool brand with the idea of conserving the world’s water,” Winter told TechCrunch. “We want to change the way that people think about water in their day-to-day lives. The shower is the most intimate part of your day that you spend with water.”

Their product has been a roaring success – its 2015 Kickstarter campaign raked in an astonishing $3m in just one month, and it has been lauded by the New York Times, Wired magazine, and Elle Decor – but Nebia’s founders have set their sights higher. Together with their team of dedicated innovators, they want to continue fighting the good water fight, discovering more ways to do right by our oceans. If that isn’t enough to make you want to sing in the shower, I’m not sure what will.